The Englewood Isles Parkway Association was formed by HOAs common to the Parkway to maintain the 776 entrance area that includes the large center island with the mature oak trees and the garden areas along the median west to Dover Drive.

The history of Englewood Isles is a history of countless volunteers and HOAs who have supported with their time and finances the maintenance and improvement of their neighborhoods and the community’s front door.

Here is an aerial photo taken in the 1960s of a portion the area which became the Isles.  Overbrook can be seen on the right; Forked Creek is on the left:

Development of Englewood Isles began in 1977 by the  Kroh Brothers.
Based in Kansas City, Missouri, they opened a real estate office at 1600 Englewood Road (Rt. 776) to sell homes in the new Englewood Isles development. Here are some scans of the original brochure (click to enlarge): 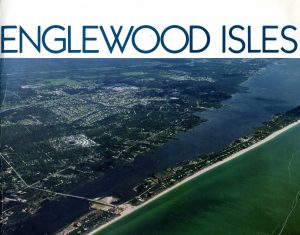 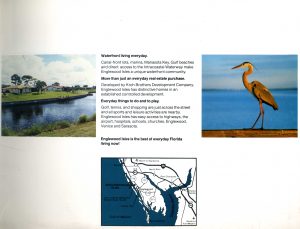 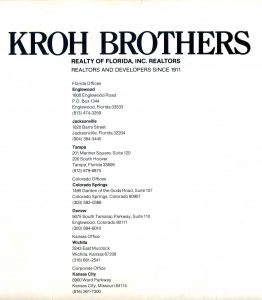 Here is their Master Plan: 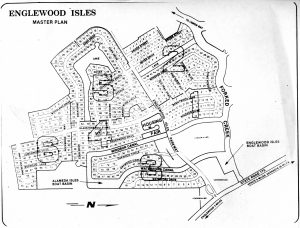 When the Kroh Brothers went through bankruptcy in early 1987 the HOAs common to the parkway decided to form an organization to continue the maintenance of the entrance area and the Englewood Isles Parkway median.

The Englewood Isles Parkway Association, Inc. came into being as a Not for Profit Corporation in 1988 with each HOA to have one representative and one vote.  Each HOA pledged its financial support and the first year’s due were $20 per parcel.  Currently the dues are $59 per parcel.

Several years ago, the Parkway Board decided to consider an overall landscape plan for the parkway.  Units 1 and 2 took the lead in this endeavor and a plan was put in place, approved by the county and modified over the years as needed.

At about the same time, Sarasota County announced that a permit was required to complete and maintain any planting on county property.  The permit was obtained by the Parkway Board.

The Parkway Board decided to fund the landscape plan through donations and named the separate account the Improvement Fund.  The fund is used to add and change planting areas along the parkway. 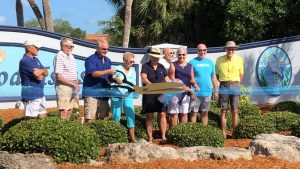 On May 1, 2019 the Englewood Isles community celebrated the completion of our renovated entrance with a ribbon cutting ceremony. There was a good turnout from the community and had in attendance Miranda Lansdale from the Sarasota County Neighborhood Grant Program. A reporter from the Englewood Sun also came to the event. After the ceremony folks enjoyed conversation and cookies baked by neighborhood volunteers. It was a positive end to a project that began in earnest in early 2018. The people who worked on the project learned a great deal along the way. There was great teamwork and those who participated should be commended for putting forth the effort as volunteers to complete a major project for the entire community.

Today the entrance area, the gardens along the  Englewood Isles Parkway and the two bridges make for picturesque views that are the front door to our Paradise.

Meetings not held via Zoom will be held at 10:00 am at the Englewood Chamber of Commerce, 601 South Indiana Avenue, Englewood, FL 3422.

Meetings are open to all residents.

IF A MEETING IS VIA ZOOM AND YOU WISH TO ATTEND PLEASE FILL OUT THE CONTACT FORM AND WE WILL GET BACK TO YOU WITH THE ZOOM LINK.

A Brief History of the Parkway Association